Importance of Comics as Literature 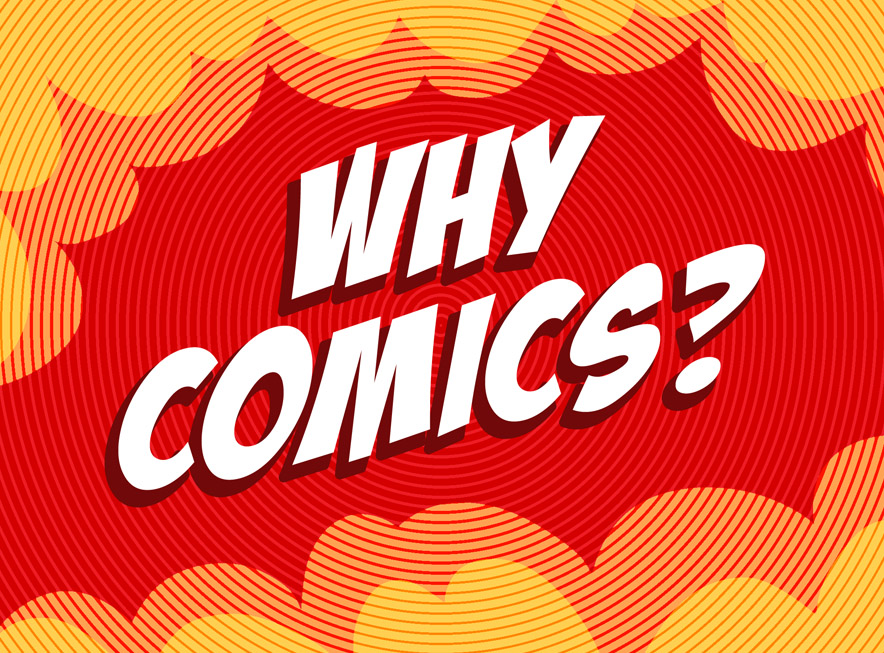 I’m a visual person. In fact, that’s an understatement. There is always a movie playing in my head visualising how something feels, or scrutinising an image painted by a cliché, or ‘seeing’ music I enjoy. It never stops.

This may be why I was immediately drawn to comics when I started reading as a child. My favourite books had characters who interacted with the panels they were drawn in, played with space and time, and even the creator (whose hand and pen would sometimes feature). At six years old I had already found my medium. I was hooked and there was no going back.

Today it’s a dangerous game to say you love comics and keep your literary cred at the same time. Historically, comics have been associated with low-brow content, misogynous entertainment, propaganda and even teenage delinquency.

As the form developed and matured, it was rebranded as the more acceptable ‘graphic novel’. I personally use ‘comics’ as an umbrella term for both; apart from the format in which they’re printed I don’t believe there really is much of a difference between them.

Comics are a medium, and just like films, books and songs, they contain a universe of genres within them that vary in quality and sophistication. The same basic language of comics can be used for entertaining escapism, as well as for creating confronting, multi-layered emotional experiences.

I believe it’s time comics were taken as seriously as any other branch of literature, and with that, I present five reasons for my undying devotion to them.

A comic is not just pictures in boxes, plastered with speech bubbles. It uses panels (time), representational and symbolic images, words, sounds and layout to create an experience. It’s a vehicle the reader climbs into and then drives though the story. And unlike any other medium, the reader controls the pace and (to an extent) the direction of that journey.

If you’re disturbed by a part of the story, you can glance over it without losing your place. If you’re enjoying a moment, there is enough there to let you linger and revel in it. If there is a large spread, you can wonder around in it and become lost. The comic creator never knows exactly how the reader will traverse their work, except maybe for the minimal requirement of reading from left to right, top to bottom. But through the presence of this unknown parameter, the comic format creates a uniquely personal experience for each reader. Even as a child I felt this and that’s how my fascination started.

Every time someone says ‘comics are great for early and reluctant readers’, I roll my eyes. Yes, it’s true – the visuals offer an alternative reading of the story and this certainly helps with the interpretation of the text, as well as with the reader’s confidence. But there is so much more to it than that.

The comic reader is expected to assemble the visual, emotive, temporal, sound and narration cues in their mind: comic reading is therefore a much more complex and immersive experience. The more acrobatics your brain performs to extract the story, the bigger the reward. So to gain pleasure from reading a well put together comic work is to know one’s way around more than just the written word.

As children, we treat and train all of our literacies equally. However, when we are adults, it is possible to feel that multi-modal literacy is an innate ability and, unlike the written word, does not require attention or scrutiny. But this is not the case, and there is a deficit in our own ability (and the ability of our children) to be aware of and critical of the various non-verbal cues bombarding us. I will come back to the gravity of this point later.

Being shunned by mainstream literature, comics became an independent medium, growing and developing in the bedrooms of their creators, on the alternative zine-scene and shared at meet-ups and conventions – far from sanitizing power of the mainstream publishing industry. As a result, independent comics have long been a playground for diverse stories created by people whose voices have been silenced on other cultural platforms.

The personalised experience offered by reading a comic means the relationship between the reader and the storyteller is a more intimate one. A comic that offers a window into the life or opinions of an individual who is different from the reader has a chance of being met with less resistance than other mediums because of the powerful emotional connection that forms through the investment required to read it.

This might explain the rise of the biographical-graphic novel and the introduction of own-voice patient graphic novels as recommended reading across various medical sectors. (For more on this, see: www.graphicmedicine.org/resources/liasison-program/)

Comics are not just about amazing art

After years of being quite elitist in my opinions of what constituted ‘good’ and ‘bad’ art, comics have taught me that skilfully executed, realistic artwork is not what makes a great reading experience. After all, leaving gaps in the ‘text’ for the reader to fill in and interpret is how engagement is established.

The essence of comics is creating a space (with parameters decided upon by the maker) where the images and words interact in the reader’s mind, resulting in ‘the story’. An engaging comic could be made with no representational imagery at all – for example, in complete darkness or with ‘dots’ as characters. The success of storytelling through comics does not rest on the ‘quality’ of the words or images alone, but on the pacing, scale and multi-sensory and emotional narrative. This is often considered by the creator way ahead of any drawing taking place, and has little to do with how well the form of the characters has been rendered.

Comics in schools can end our visual illiteracy

As our screens overload with information, and our attention spans shorten, messaging is becoming more visual. Images can say and emote so much in a span of a glance. Each time you look at your phone, tablet or laptop, images are selling you a product, idea, opinion or agenda. Yet visual illiteracy is on the rise, as our ability to recognise and question visual propaganda wanes.

This brings me back to the earlier point that comics require multi-modal literacy of their readers. Treating comics as a valid form of literature, bringing them into the curriculum and studying the mechanisms that govern them is one of the major ways to prepare the next generation for the changing world ahead.

And with these words, I urge the ‘gatekeepers’ of the written word to start recognising and enjoying the rich diversity of what comics have to offer. Publishers of all genres could look into expanding their lists to include comics. Librarians are encouraged to read all the books in the comics-section to ensure appropriate age-classification of their titles. Educators could look to comics to boost their area of the curriculum with visual literacy. And this entire revolution starts with each individual picking up a graphic novel literary fiction and setting off on a journey of their own.

This article was first published on AUSSIE BOOK REVIEWS blog page, on 30th Nov 2021. Thank you to the Fremantle Press editing team for help with shaping this article.